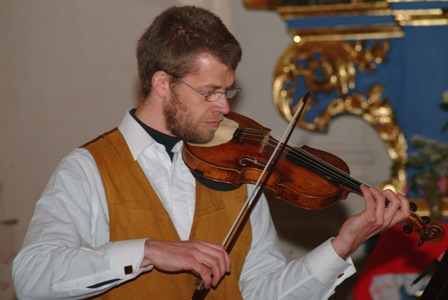 Since 1997, after 20 years of active “modern” violin playing, I have focused my attention on baroque violin playing, initially under the instruction and guidance of Eva Maria Röll in Munich and later Silvia Schweinberger in Salzburg. The change to playing without chin rest and shoulder pad put the experience gained as ambitious orchestra and quartet musician to a hard test, but which I do not regret to this day. Thanks to turning to early music and old methods of playing I was able to greatly extend my musical horizon, both in the literature and in the perception of music and diversified forms of expression.

Even Viktoria Mullowa, a renowned first-class violinist of the Russian School, in an interview for “the Strad” magazine in 2009, told of her totally different approach to the works of Johann Sebastian Bach and of the homogeneity of instrument, baroque bow and player. I can only agree with her.

Parallel to my continued training in playing the baroque violin (at a high amateur level on various courses in Trossingen, Neuburg, Zell an der Pram, Magguzano), I concentrated my violin making more, though not exclusively, on historical instruments and bows.

I completed my violin making studies in 1996 by graduating with a diploma in Violin Instrument Making and Repair from the Violin Making School at the then Newark and Sherwood College, Newark-on-Trent in the English Midlands. My apprenticeship with Hartmut Münzberg in Lower Bavaria (1996–98) permitted me to prepare for the German apprenticeship certification exam in Mittenwald (1997) and kept me very busy with violas da gamba and baroque violins as well as reconverting and restoring. I passed my master craftsman examination in Innsbruck, Austria, in 2001. 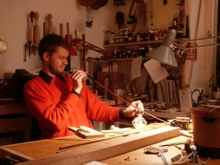 In 1998, I was drawn to the “Blue Danube” and moved to Vienna where I learnt essential routines in handling "modern" instruments at a high level with Othmar Lang, the violin maker of the Vienna Philharmonic. I am still thankful today for many a fond memory of working directly with the orchestra and their instruments. Where else could a violin maker have such immediate access to important instruments, world-famous concert halls and opera houses?

My interest in historical instruments and bows gave me no peace and so in 1998, under the guidance of Hans Salger in Bremen, I came to baroque bow making, which I then continued to discover and refine for myself.

In 2002 I ventured to go independent. As a compromise between various origins in Germany and Austria, we chose to settle in the small border town of Laufen an der Salzach. We feel very much at home there; the proximity and easy access to Salzburg as well as the almost unsurpassable recreational advantages of the region make life bearable.

Over the past ten years, playing baroque music has turned my active music making into something much more than a mere pastime. Engagements in ensembles like the Collegium Musicum Stuttgart, Allegria Musicale Biel, Salzburg Barock, Muffat Consort Niederalteich and Polyhymnia Wien as well as the work with my own Laufen Baroque Ensemble confront me time and again with challenges and above all lead to direct communication with the instruments and bows I have created.

In this way I learn how and why a bow and instrument perform optimally and sound best, and how I can best approach the ideal concept.